The Journey to Un’Goro revolve around the new quest cards which are all rather powerful, except the Warlock. If you aren’t an avid collector feel free to ignore the Warlock entirely. Each quest can be completed in the respect class at the beginning of the game. You’ll start the quests with the legendary cards in and so you can decide whether the card is worth the effort or not (they are). For example, in Hearthstone Journey to Un’Goro expansion to complete the Rogue Quest you’ll have to summon 4 minions with the same name. If you manage to complete the quest you’ll be rewarded with the spell “Crystal Core”, this raises each cards attack and defense to 5/5. As mentioned before, the Journey to Un’Goro adds fresh new mechanics to the game. Themost notable changes and new additions are the Adapt Ability and Elemental Minions. The adapt ability lets you choose an adaptions for one of your active minions from a total of 10 choices which you can read more about here. From what we can tell, the majority of cards with the adapt ability trigger the adapt ability when they attack where as some require different requirements to trigger the effects. The new mechanics introduced and the quests heavily depend on the Journey to Un’Goro Cards that have a very low drop rate. If you aren’t one of the lucky few who was logging in everyday you probably didn’t even get the rare Journey to Un’goro card “Volcanosaur” that has the adapt ability. 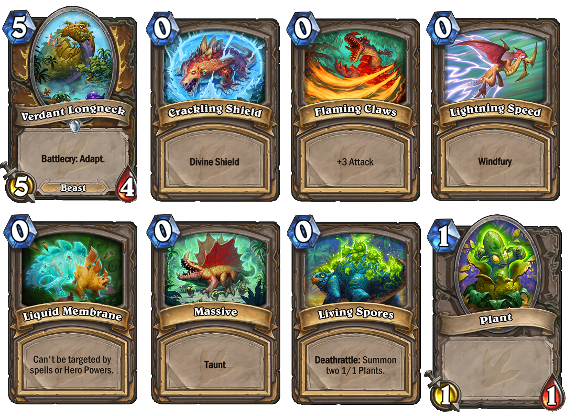 The meta-game hasn’t been completed developed and could use some work but that doesn’t mean that Hearthstone Journey to Un’Goro isn’t a pleasure to play. Rather, I found myself logging back in the game to collect as many legendary cards as I could because of how fresh the game feels after so long. But a major downside is that the prices of the packs have gone up. Standard 50 packs of Hearthstone cards cost €50 whereas you get only 40 Journey to Un’Goro Cards for the same price!